MXC's new protocol, Proof of Participation, is set to revolutionize the way people interact with blockchain.

The vision behind the MatchX and MXC Foundation formation is to build a vast, multi-faceted, free global data network, introducing a systematic process to both simplify and increase IoT data transactions. The Mining infrastructure has received praise from critics, now it’s set to take on the existing billion dollar Mining protocols.

The Machine eXchange Protocol or MXProtocol was developed on the Proof of Participation principles, taking advantage of Low Power Wide Area Network (LPWAN) technology to create decentralized infrastructure. MXProtocol is designed in a way to support and extend the massive data economy globally and to ensure the decentralization of sharing economy by empowering miners to participate in the construction of a decentralized, widespread, and secure LPWAN network. This global network will be available to everyone, by simply connecting anything to the network, one will be able to take advantage of a completely connected world via data transfers, benefiting humanity as a whole. 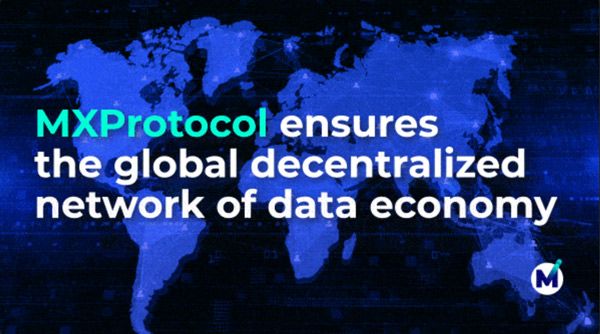 Generally, blockchain protocols are defined as a basic set of rules that specify how data will communicate between different nodes, thus forming the structure of the blockchain. Every blockchain network requires a consensus mechanism. This consensus is used to validate each new block added to the chain, thus ensuring the accuracy of each block and preventing fraudulent transactions before they are added to the blockchain.

The MXProtocol, based on the unique consensus mechanism of Proof of Participation or more commonly known as “POP”, allows data to be efficiently and reliably connected over extremely long distances at a very low cost and with extremely low energy consumption. MXC’s Proof Of Participation Model ensures MXProtocol remains a robust, economically and environmentally friendly Data Protocol. This allows the MXC network to remain stable, irrespective of the growth of users during our global adoption movement. This is yet another advantage of the MXC data acquisition methodology and machine to machine communication.

The Proof of Participation mining model as the consensus mechanism for the MXProtocol ensures a network created by the mining community is robust, secure, and decentralized. Under the POP model, the MXProtocol measures every node based on its activity or participation in the peer-2-peer network and gradually removes those nodes from the federation that are not participating. In return, miners are given a health rating based on their network contributions or “participation”, this ultimately ensures increased network contributions. In its purest form, the POP protocol is all about the participation of the miner in creating and sustaining the network. Hence, the more you participate, the more robust the global network becomes. 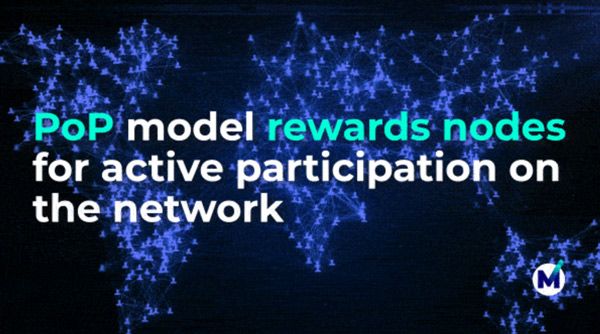 How does the POW model function?

The Proof of Work or POW consensus mechanism is one of the most well-known, as the very first cryptocurrency: Bitcoin uses it. POW was adopted as the consensus model for Bitcoin after the creator, Satoshi Nakamoto, included it in the Bitcoin white paper as a method insulated from fraudulent transactions, except in the event of more than a majority attack. This was, however, based on the hypothetical scenario, where a group of miners takes control of the majority of network computing power to prevent new transactions from being confirmed by miners. This kind of attack can effectively stop some or all the transactions on the network and impact retrospectively by reversing the previously confirmed transactions.

A complex mathematical puzzle characterizes the POW consensus mechanism. Every node on the network, also known as miner, rushes to solve and when the first miner solves this puzzle, it is rewarded with a freshly minted coin or token. If it’s Bitcoin, whoever solves this complex problem, as a first miner, receives freshly minted Bitcoin as its reward or categorized as a block reward. Thus, solving complex mathematical puzzles results in verifying new blocks of transactions, which get added to the existing chain of previous blocks. The details of every approved transaction would be recorded in a block of data, and no block can ever be edited or deleted and therefore forms an unbreakable chain. 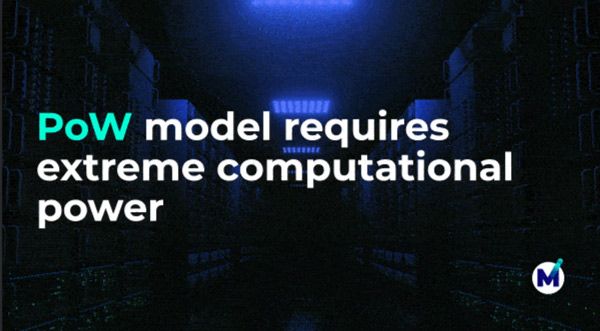 Solving these mathematical puzzles in a reasonable amount of time in order to compete against other miners requires a significant amount of computational power, resulting in high electricity bills and a shorter lifespan mainly due to overclocking of these complex computational machines as miners.

POW in an example

Let’s say we have two users Kim and Mike, and Kim wants to give Mike a single Bitcoin to purchase an old vintage car, which Kim believes Mike has in excellent condition. Also, we can assume that Kim has a Bitcoin to conduct the purchase, and it can be verified as there will be an existing record in Blockchain validating this transaction. Once Kim initiates the transaction, the transaction details are broadcasted across the whole network of Bitcoin users. The users of the Bitcoin network, or more specifically miners, intercept it, and a unique competition is held to find a winner who can validate the transaction as legitimate. 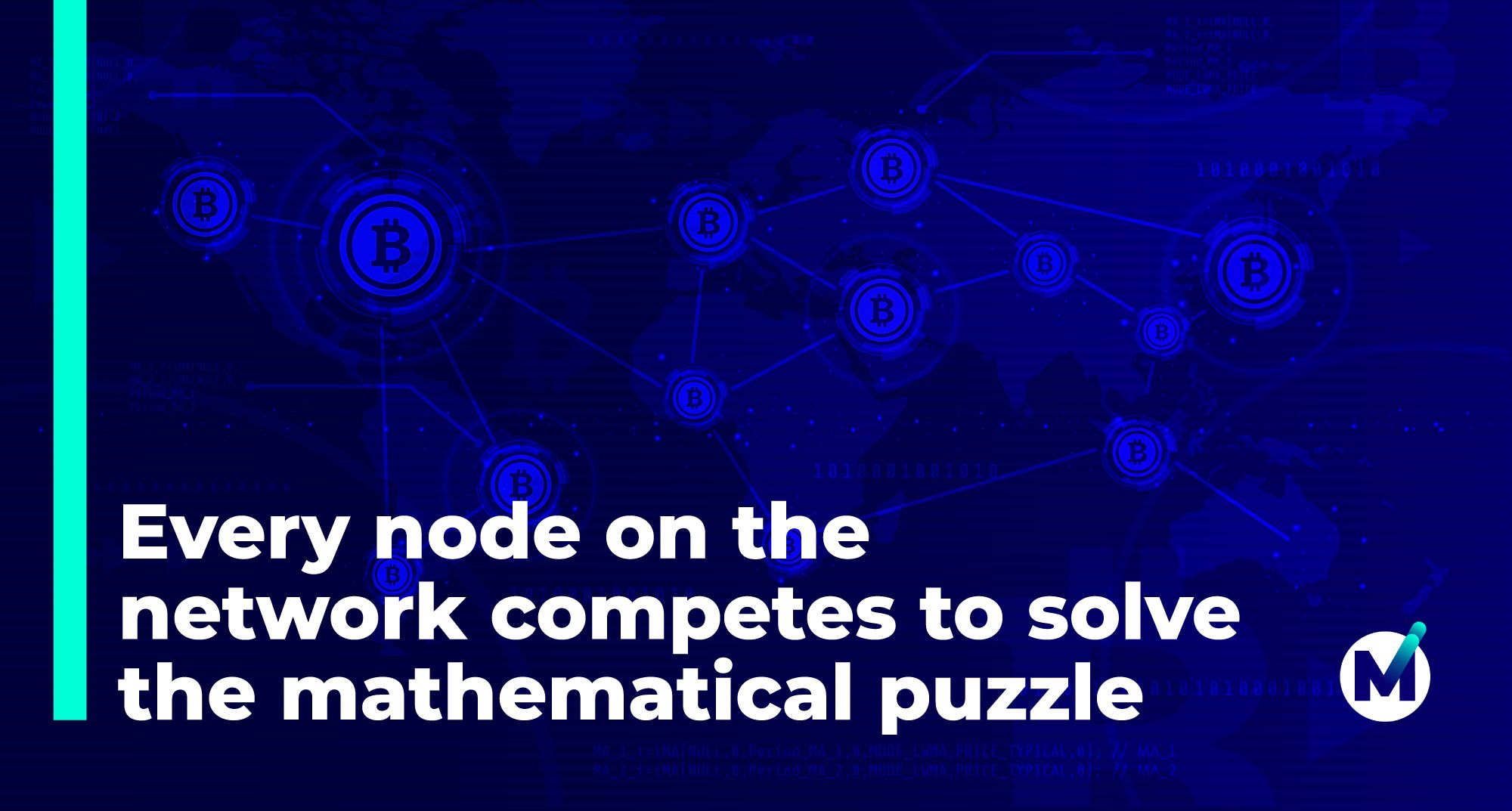 This consensus mechanism is a process referred to as Proof of Work. Every user of the network or miner will try to be the first to derive this mathematical puzzle. This process ensures that each transaction goes through rigor to prove that it’s legitimate and not duplicated. In return, if they are successful, they get Bitcoins, and these rewards create enough incentives for active mining participation. Unfortunately, the competition between the miners motivates them to have more and more powerful computational machines, thus leading to massive computing rigs with costly equipment and ever-increasing power consumption, leading the mining opportunity to be impossible for the average miner.

How does the POS model function?

The Proof of Stake or POS is widely used by tokens such as Ethereum (invented by Sunny King for Peercoin and Primecoin) as an alternative and built on similar ideas from POW. Like the POW model, the POS consensus mechanism is designed to validate transactions and verify the accuracy of new blocks added to the existing chain. However, the process behind it is entirely different. The POS model aims to address the high consumption of electricity for generating sufficient computational power to solve POW mathematical puzzles. It does this by attributing the mining power to the proportion of the coins/tokens held by a miner. Thus instead of utilizing the extremely high consumption, a participant’s mining ability is limited to mining a percentage of transactions based on their ownership stake. For example, if a miner owns 2% of coins/tokens available, he mines only 2% of the block. In short, the POS consensus mechanism limits one’s mining ability according to the number of coins/tokens they hold of that particular cryptocurrency. 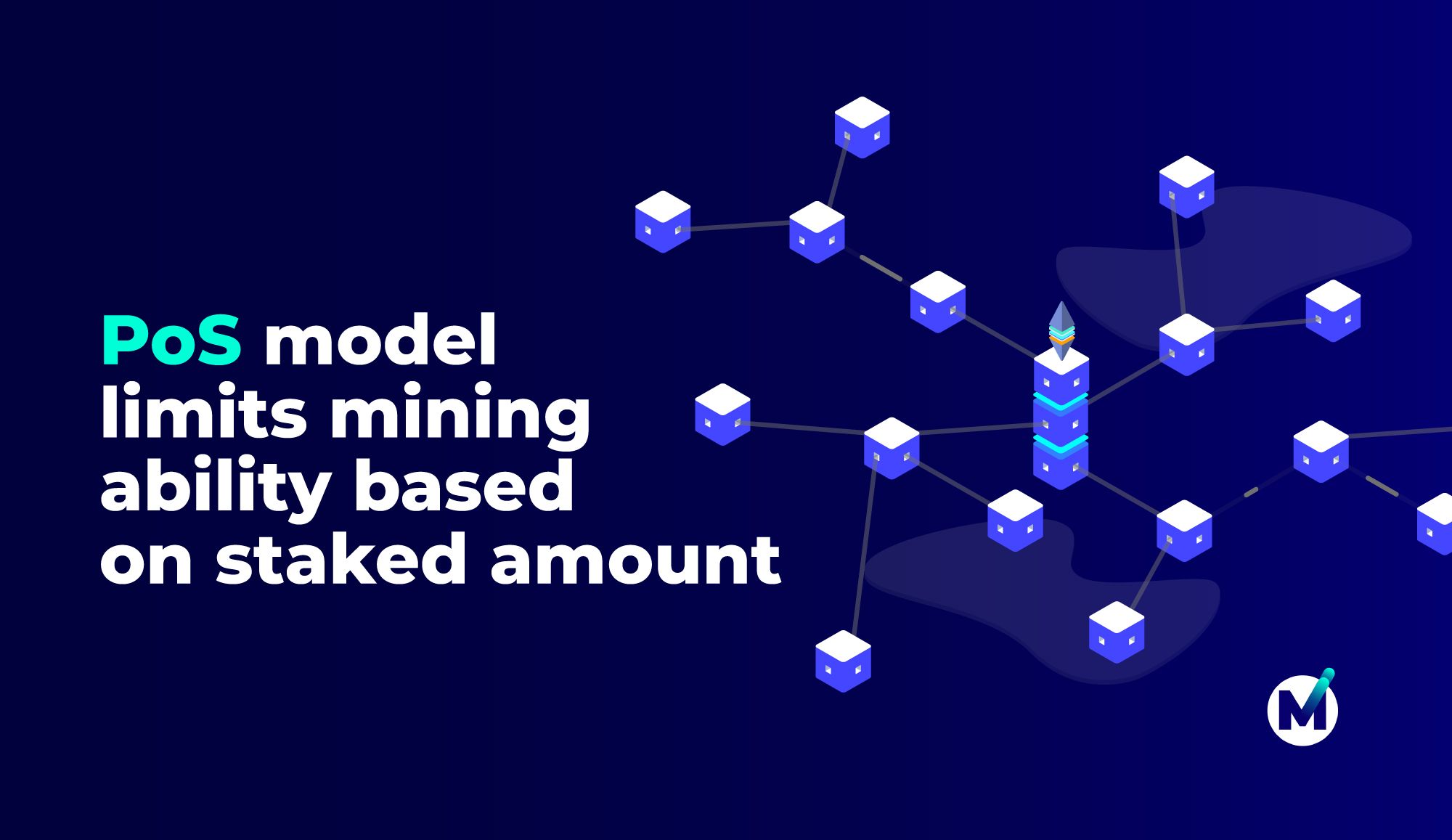 The POW model positions all the users on the network based on their combined computing power. The POS model rewards according to how much cryptocurrency a participant stakes. Thus, the higher the staked amount, the more mining capability. The POS model usually rewards the miner with a share of transaction fees. In most crypto models following POS, all units of cryptocurrency exist, and none are minted as new blocks are validated.

How is POP advantageous over POW & POS:

MXC has been built around the Proof of Participation mining model. POP is a relatively new protocol formulated and evolved from elements of both POW and POS. MXProtocol uses POP as a consensus mechanism and is built on the popular cryptocurrency and blockchain system Ethereum (ER-20).

Furthermore, POW and POS are designed to help nodes on a blockchain network verify transactions and reward miners based on the work or the staking elements in respective cryptos. In contrast, in the POP model, the miners are rewarded for keeping the network alive and how active those miners are on the created network. So, more participation by the miners on the network, the more your network participative status increases.

One of the significant drawbacks of POW is its inefficiency. This mechanism demands excessive consumption of energy and thus results in high monetary and environmental costs to miners. Just to highlight the high energy consumption, as of June 2019, the Bitcoin miners alone were responsible for consuming more energy than the Czech Republic for an entire year. The excessive demand for energy consumption leads to increased financial and environmental costs. With the scale-up of mining operations, these numbers only stand to grow.

On the other hand, the POS does reduce the consumption of computational resources by allowing each miner to mine according to the amount of cryptocurrency they maintain in their wallet, simultaneously reducing their block reward to non-existent and rewards miners with a share of transaction fees. The Proof of Participation model integrated into our MXProtocol is designed to reduce this significant computational and energy requirement for the miners to less than 2.9 kWh. This becomes possible thanks to leveraging Low Power Wide Area Network (LPWAN) technology of the m2 Pro and POP consensus mechanisms.

Another significant benefit of the POP model over the other two aforementioned mechanisms is that it improves security. The POW model is vulnerable to security issues, like “selfish mining attacks”, where an attacker tries to waste the computational resources of the competing miners by successfully mining a block and keeping it with themselves for as long as possible. Thus, preventing the timely addition of the verified block to the chain and limiting the ability to validate the verified block. Moreover, both the traditional models are more prone to other security concerns like denial of service attacks (DOS). This is where an attacker floods the nodes with traffic, hindering the normal functions of the network. Sybil attacks are another risk. This is where an attacker creates multiple nodes that behave maliciously and disrupts the standard order of operations. However, any network with a node or a junction point is prone to damages from these and other security attacks. POW and POS put more importance on the nodes than PoP; thus, the damage would be more critical in those cases.

Traditional POW models can disincentivize the mining community as the network ages by introducing halving; of course, some see this as “value-adding” to the overall token price, but this is not a guarantee. POS does not halve as the rewards are based on the share of transaction fees and no new units of cryptocurrency are produced, thus limiting the mining rewards as the share of transaction fees, which are also reduced as the pool of miners increases and respective mining power of each miner becomes lessened.

The MXProtocol, which operates on POP, does not have halving and won’t enter into a halving framework. The key to MXC and the M2 Pro hardware is to ensure the longevity of the network, thus a wholly novel and state-of-the-art concept was introduced: “Miner Health” for those who are actively contributing to the network’s global expansion. 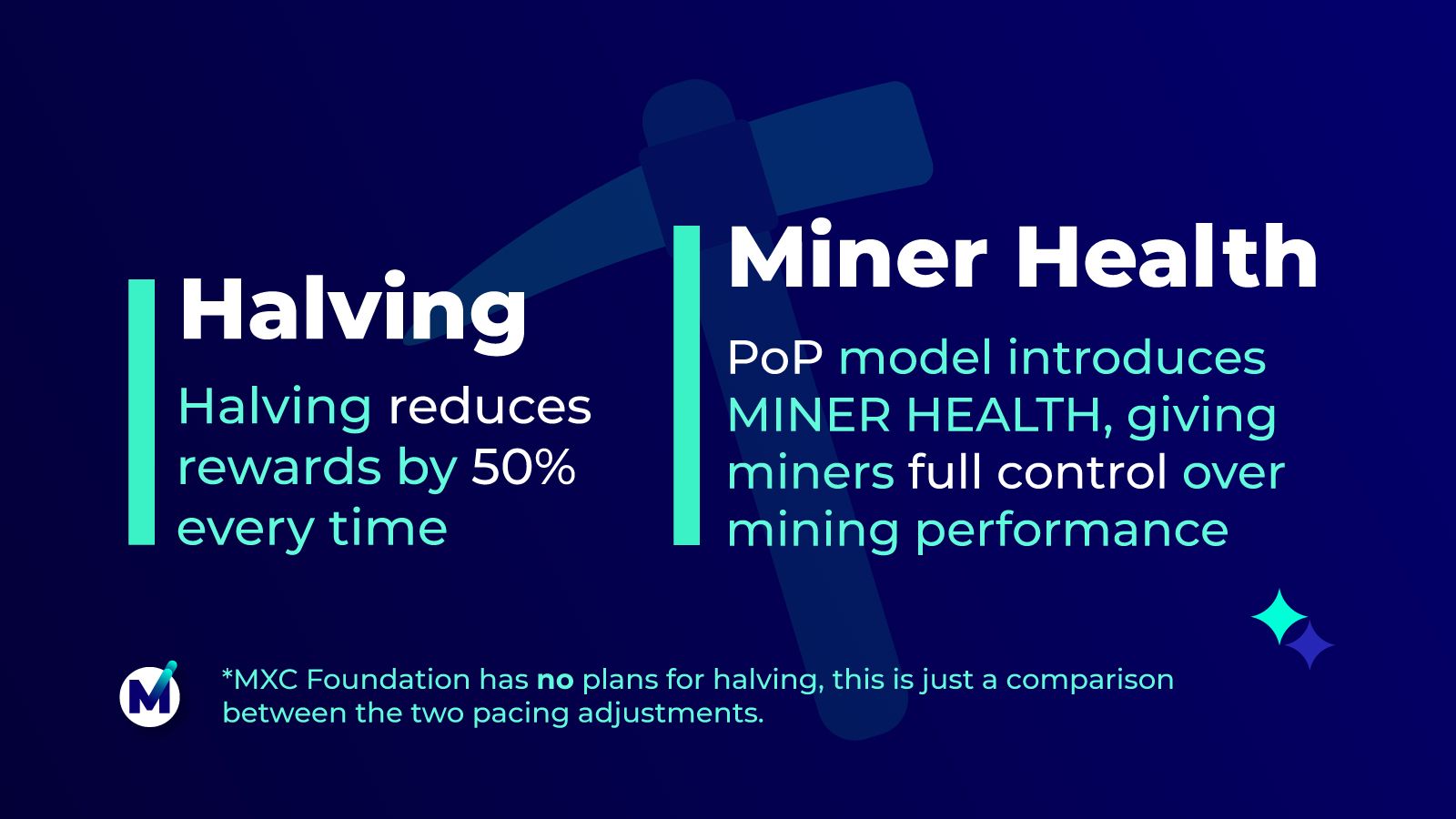 Miner health is an interactive user-focused model, empowering miners with 100% control and the flexibility for the very first time to largely choose their own participative score, according to their ease and comfortability. With miner health, the miner is in control of their aspects of earning; this is an added level of decentralization, meaning your miner and your mining status, depends solely on your participation, not participation from the others in the network.

So, in any circumstance, and in many ways, the M2 Pro POP model is better than halving as it gives you a high level of control over your own mining.

The introduction of miner health ensures participation of the miner, creating a globally participative and inclusive network, granting incentives to miners for placing their miners in a way that will provide strong LoRA signals, thus ensuring stable network coverage produced by the mining community for the data world of tomorrow. This enhances increased data network functionality!